Home » A Truly Catholic Law School in the Heart of Florida

A Truly Catholic Law School in the Heart of Florida 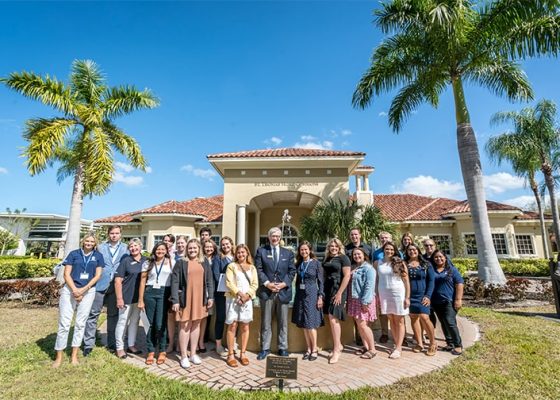 Source: Inside the Vatican

At Ave Maria School of Law, Catholic Legal Education is Alive and Well

The relocation of Ave Maria School of Law to southwest Florida in the summer of 2009 marked a new era in the state’s position in legal education. Since then, Ave Maria Law has been an “unabashedly Catholic” institution of higher learning. Despite its short history, its academic program and truly Catholic character have earned Ave Maria Law a respected place in Catholic legal academia.

It’s an all-expense-paid, highly selective, and intensive program. In order to be considered for the Academy, candidates need to fulfill one of the eligibility criteria: earned or will earn an undergraduate degree from an eligible Cardinal Newman Guide-approved school or a Catholic college, or served as a FOCUS missionary. Students of public colleges who are active members of a Newman or Catholic Student Center are also considered. And Ave Maria Law doesn’t forget its Michigan roots: members of Catholic parishes supporting the universities in the greater Ann Arbor area are also eligible for the program. Besides fulfilling eligibility criteria, application is not much different from applying for college.

Historically, between 8 and 12 students have attended the yearly program, but from March 3-6, 2022, Ave Maria Law hosted a record number of 16 Academy participants. This year I had the privilege of being one of them.

Cardinal Newman Pre-Law Academy is a three-day law school program that provides a full-immersion experience into legal education. During the Academy, we had the opportunity to attend a discussion in the Socratic method, sample a law school class, hear from current Cardinal Newman scholarship recipients, become acquainted with faculty members and learn more about career pathways upon graduating.

So it doesn’t come as a surprise that the program includes an introduction to moral foundations, emphasizes the importance of faith on campus, and discusses faith and reason in Catholic doctrine.

Claire T. O’Keefe, Associate Dean of Admissions, sums up this educational philosophy: “It’s always been our founder’s, Mr. Monaghan’s, dream to have this type of law school and send out into the world ‘change agents,’ who are equipped with the education and the knowledge to go out and effectuate real change in the world. Cardinal Newman Pre-Law Academy and the generous scholarship named after Newman are both designed to attract those types of students.”

Besides the academically rigorous and intense, intellectually stimulating program, we toured the city of Naples, Florida, experiencing the city’s gastronomic scene and beautiful beaches, and socialized with Ave Maria’s faculty, staff and students – a final touch, offering participants a glimpse into Naples’ lively social life.

Everything about Ave Maria Law reflects its Catholic character and commitment: crucifixes in classrooms, well-attended daily Mass, and the Catholic intellectual tradition incorporated into the curriculum. According to the Religious Law School Rankings, for years Ave Maria has been continuously ranked number one among most devout Catholic law schools. The school’s faculty and staff embraced the phrase coined by Claire T. O’Keefe, Associate Dean for Admissions: “Ave Maria is unabashedly Catholic.”

Elizabeth Westhoff, Chief Marketing and Communications Officer, says. “I promote that we are the Catholic, conservative and competitive law school in the United States.”

Some would say that this concept doesn’t reflect the spirit of the times – maybe even creating a so-called “hostile environment.” The reality is, as the only Orthodox Christian (Serbian Orthodox Church) participant in the Cardinal Newman Pre-Law Academy, I found the environment at Ave Maria Law welcoming and surprisingly ecumenical.

At the introductory meeting, John M. Czartentzky, CEO and Dean of the school, pointed out my Serbian origin, saying loudly: “I know Serbs! You are tough guys.”

More importantly, during his welcoming speech, Dean Czartentzky addressed the Catholic nature of the school, while clearly stating its ecumenical aspect: “We believe Ave Maria School of Law is a haven for all students who are serious about their faith. Unlike all but a tiny few law schools in this country, devout Catholics, Christians, and believers of all stripes will find a welcoming and supportive culture. In addition to my fellow Latin-Rite Catholics, particularly close to my heart are Orthodox and Byzantine-Rite Christians. My mother grew up in the Ukrainian Greek Catholic Church, so from a young age, I have loved the beauty and wonder of the Orthodox liturgy.”

Participants of the Pre-Law Academy attended daily Mass at St. Therese of the Little Flower Chapel on campus, led by Monsignor Frank McGrath, the school’s chaplain. Every day Monsignor McGrath prayed for the Consecration of Russia and Ukraine to the Immaculate Heart and for peace among Orthodox brothers. During the lunch break, Monsignor McGrath initiated a conversation with me to learn more about my Orthodox faith and the Serbian Orthodox Church; I was reminded of the significance of ecumenical dialogue between Catholics and Orthodox in everyday communication.

According to the American Bar Association, the average law school graduate owes approximately $165,000 in student loans; more than 95 percent of law students take out loans. In a time of global pandemic, recession, and constant tuition increase, Ave Maria School of Law offers generous scholarships and financial aid to prospective students. The school’s point of pride is its Cardinal Newman Scholarship Program.

In addition to eligibility criteria similar to the Pre-Law Academy’s, the Cardinal Newman scholars need to satisfy Ave Maria’s academic standards: prospective students need an LSAT test score of at least 154 and a minimum undergraduate GPA of 3.4. On top of the full tuition and fees, Cardinal Newman Scholarship recipients with an LSAT score of 154-155 receive a one-time $5,000 stipend, and those scoring 156 will receive a one-time $10,000 stipend towards living expenses incurred during their first year. The Cardinal Newman Scholarship is renewable for the period of three years, provided that recipients maintain a GPA of 2.667.

Following a multi-year analysis, Ave Maria Law School relocated from Ann Arbor, Michigan to Naples, Florida in the summer of 2009 – yielding positive results. After 13 years, the campus is a vibrant and intellectually stimulating Catholic community. The only law school in the area, Ave Maria Law is a feeder school for the legal market in southwest Florida.

Ave Maria’s graduates go on to become successful real estate, tax and trial attorneys, law clerks, and federal and state judges, living the Ave Maria mission and Monaghan’s vision. Says Westhoff, “Tom Monaghan always said, ‘Outside of the priesthood, the people who have the most impact on our society are attorneys.’ He wanted this law school to form attorneys who will go out armed with their law degree and their rosary and change the world!”

Along with a strong regional presence in southwest Florida, Ave Maria Law has a nationwide alumni network. But it appears to be aiming for a global impact as well. In May, Ave Maria School of Law and Poland’s Cardinal Stefan Wyszynski University jointly organized Saint John Paul II’s Natural Law Legacy and International Human Rights: Toward a Century of Persuasion conference in Warsaw, Poland. The program featured an impressive line-up of speakers: Adrian Vermeule, Robert P. George, Ryan T. Anderson, George Weigel, and R.J. Snell, among others.

Judging by this event, the school’s academic rigor, and its Catholic commitment, Ave Maria School of Law – and its graduates – are destined to set the world on fire.